In this article we would like to introduce the Commodity Channel Index (CCI), which was developed in 1980 by commodity trader Donald Lambert. In this article we show how to calculate the versatile trend follower and what valuable services it provides in practice.

Calculation of the CCI

The Commodity Channel Index was originally designed to trade commodity contracts, but over time it has proven to be a reliable tool for traders in other markets and at different time levels. Whether a 5-minute or weekly chart, indices, individual stocks or commodities - the CCI can be applied anywhere and at any time. It has a clear objective: to identify the beginning and end of price trends, seasonal trends or cycles. For this purpose, the distance between the current price and a moving average is examined. The idea behind it: As soon as a certain level is exceeded, a starting trend is assumed and as a result a trading signal is given. Let's take a look at how Donald Lambert's Commodity Channel Index is calculated.

The calculation of the CCI makes it clear that this simple concept can quickly lead to confusion. The good news is that any standard analysis software or trading platform automatically performs the continuous calculation so that the trader does not have to worry about the calculation. Before using an indicator, it is nevertheless advisable to look at the calculation basis in order to understand exactly what is behind the respective indicator.

Classical interpretation of the CCI

The CCI expresses - to put it simply - how far the current prices have moved away from their moving average. The developer of the CCI has adjusted the scaling of the indicator so that the "normal" price fluctuations move within the extreme zones +100 and -100. If the CCI occurs within this range, there is a sideways trend. According to Lambert, an incipient strong upward trend can only be seen when the CCI rises above the upper extreme zone +100 - traders should therefore go procyclically long here. If the CCI returns below this level, it is advisable to close out the long position. 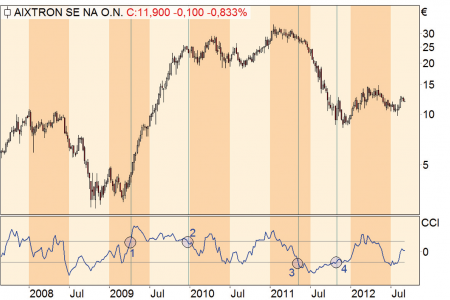 Image 1: The chart shows two selected trades executed using the CCI. In mid-April 2009 the CCI generated a buy-signal (1), at the end of December an exit-signal (2). The CCI identified a profitable short trade in May 2011 (3) when it dropped below the -100 level. At the end of October, this short signal was neutralized again with the return above the -100-level (4).

The reverse applies to the downtrend: a strong downtrend exists only when the CCI falls below -100. The trend is considered to have ended when the indicator returns to the "neutral" zone between -100 and +100. Furthermore, the course of the indicator provides information about the strength of the trend: the steeper the curve, the stronger the trend and vice versa. Figure 1 shows the performance of the Aixtron share as a weekly chart since autumn 2007. With the help of the CCI, highly profitable trading signals were generated: In mid-April 2009, the CCI broke through the +100 mark and thus generated a buy signal (1). At the end of December, the CCI fell below this limit again, generating a sell-signal (2). Thus, almost the entire upward-movement could be taken. However, the CCI identified a profitable short trade in May 2011 (3) when it dropped below -100. At the end of October, this short signal was neutralized again with the return above the -100 level and the position closed (4). This trade was also highly profitable and shows that Lambert's trading strategy is still justified today. However, there were also trading signals in this period that were loss-making. Even the CCI cannot work miracles. 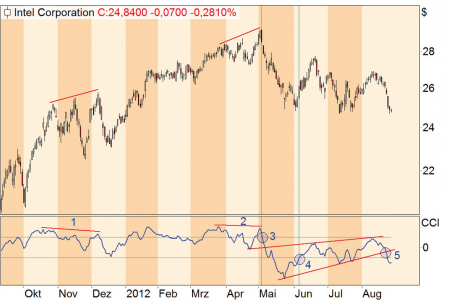 Image 2: Divergence analysis works with the CCI (points 1 and 2) as well as the drawing of trend lines or entire price patterns, such as here a wedge (breakout at point 5). In addition to the original trading method according to Lambert, the CCI can also be used as an overbought or oversold oscillator (3 = short signal, 4 = exit).

Alternative use as oscillator

Over time, it has become increasingly clear that the CCI is not limited solely to the trading method presented by Lambert. On the contrary, the indicator can also be used successfully to detect overbought or oversold price zones. Here, the two extreme zones no longer have a trend-confirming character, but serve as anti-cyclical brands at which possible trend changes take place. If the CCI falls below the lower limit of the scale, the subsequent crossing over the -100 mark is considered a long entry signal. If, on the other hand, it rises above the upper scale boundary, the subsequent drop below the +100 mark is evaluated as a short entry signal. This method is particularly suitable in trendless phases or broad trading ranges, while in trend-strong phases, false signals are increasingly observed.

Like the MACD, the CCI can also be used for divergence analysis. Here, the price performance of the underlying asset itself and that of the indicator are compared in order to obtain indications of a possible trend change (see markers 1 and 2 in the adjacent chart). Normal trend lines and price patterns can also be drawn in the CCI. Intersections above or below these lines are used as trading signals (see marker 5).

The CCI is an extremely versatile and flexible tool for traders, because it makes statements about trend direction, but also indirectly about trend strength. Like all technical tools, this indicator has its weaknesses and requires some experience before it can be used live. In this context, it is first and foremost the rather "wild" development of the indicator that should be mentioned, which often makes it difficult to interpret the indicator. Here every trader should find his own individual setting parameters that fit the trading instrument and the time level.