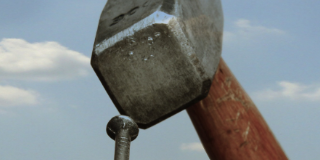 Traders are always looking for advantages, and if we believe the textbooks of technical analysis, candlestick formations can give us such an advantage in analysis and trading. Haramis, engulfings and hammer are promising names, but what power do candlesticks really have? In this article we will look at one of the most famous candlestick patterns, the Hammer.

The Japanese candle charts (candlesticks) are one of the oldest versions of the chart display or chart types. In addition to information about the current performance of an underlying asset, they can also be used to derive direct buy or sell signals. An introductory article on candlestick charts and some patterns can be found on Godmode-Trader.de, which I would like to recommend in preparation for this article. As already written in the introduction, this article is all about the Hammer formation. 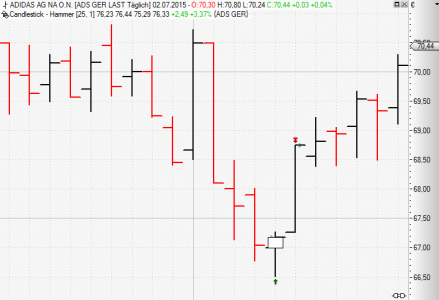 The picture above shows the price development of the Adidas share in the cash chart. Only days on which a hammer formed are shown as candles. To examine this candle pattern in more detail, we need to define exactly what a hammer is. This is the only way we can

Search for patterns and evaluate potential buy signals. For this purpose we applied the following rules. A hammer is present when:

Since trading is supposed to follow the KISS principle (Keep it simple stupid), I did without any filter in the first step. If there is a hammer formation according to our model, a long position is opened at the closing price. The question is, how much power has this candle?

If one reads through the interpretations of the hammer, one would expect rising prices afterwards. For example, how big are the gains in all 30 DAX shares if we get out one, two or more days after training a hammer? The exit criterion is therefore purely a time criterion. No separate stops or price targets were set and in order to do justice to the different price levels of shares, 1,000 euros were invested in each hammer formation. Consequently, fewer shares are bought from a high-priced share than from a low-priced one. Each hammer is thus to be equally weighted in terms of performance. The result of our test is shown in picture 2. 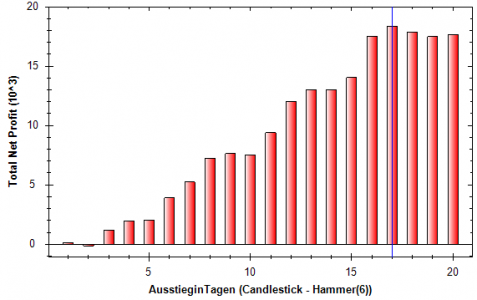 In the test period since the year 2000, the hammer could only surprise, but not convince without further filters.

A hammer consists of only one candle and it is reasonable to assume that the predictive power is also only short-term. However, as can be seen in Figure 2, the approach achieved its maximum performance with an exit on the 17th day and not one or two days after the formation was formed.

The upward trend can also be seen very clearly. At the optimum of 17 days, the hammer has a hit rate of 55 percent and a profit factor of 1.29 before costs. These are both not overwhelming results, because with 2,345 trades there is only a profit of 18,359 Euros before costs (at the investment sum of 1,000 Euros per trade). The trader cannot afford 10 Euro order fees with such a tight result. The portfolio equity in Figure 3 also shows that things are sometimes very wild. 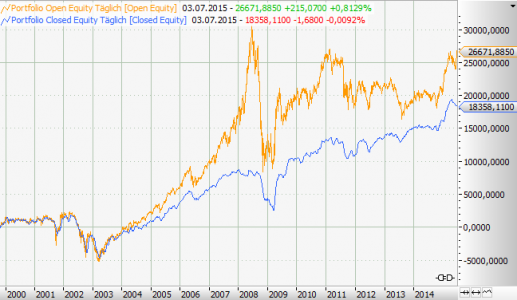 All in all, there is still no satisfactory result and we would have to go back to the area of optimisation.

We would have enough approaches for this. For one thing, we could vary the hammer formation itself. Does it absolutely have to be a white candle body? Should the closing price perhaps be directly at the high and not have a 25% margin?

But optically I liked the found hammer formations already quite well, so that I concentrate on the use of a filter. Since the hammer is seen as a bullish reversal signal, we unpack the big club and play through the worst case scenario.

The hammer must now appear in a bear market and follow a weak day. We define the bear market by the 200 momentum. As soon as this is in negative territory, we can take action. In the second filtering step we need a hammer formation that has formed after at least one weak day. Picture 4 illustrates our pattern to be analyzed now. 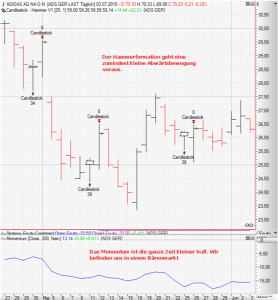 If we follow the classic interpretation of the hammer, we will be disappointed once again. Picture 5 shows the profit before costs if we apply our system to all 30 DAX shares and close the position again after X days.

Once again there is a positive trend towards longer holding periods. The maximum performance of just EUR 2,514 is achieved with an exit of 18 days, whereby a total of only 428 trades were executed. If we again add a flat 10 Euro cost per trade, this optimal setting also ends up in the red. In addition, the hit rate is again only slightly above 50% and a profit factor of only 1.14 rounds off the critical picture.

If a hammer does not work in a bear market, how does it perform in a bull market? To analyze this, we are changing our momentum trend filter. The momentum must now be above 0, which means nothing other than that today's share price must be higher than it was 200 days ago. An example is shown in picture 6. 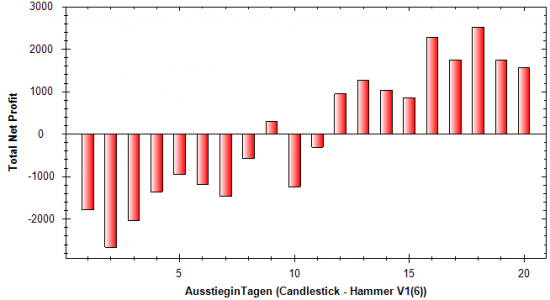 I optimistically expected the result of the new test run in our DAX shares and when the chart popped up (see picture 7), the next damper quickly followed. To make a long story short: the same game as before. The same trends in all aspects and significantly better key figures were not achieved. 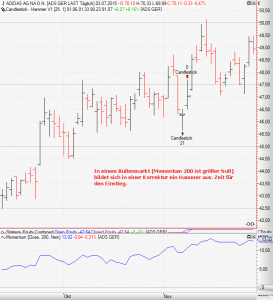 I must say I'm disappointed. Not that the result surprised me, but as a trader and in this case especially as an author, one naturally wishes to be able to come up with positive results.

Although we have managed to give a hammer formation a certain bullish tone, relatively regardless of where it appears in the price, anyone who thinks they can buy one directly and then only have to wait a few days until the profits bubble up will be disappointed. In our test we used simple and logical criteria to improve the performance of the candlestick pattern "Hammer". Without success. I am sure that the Hammer as a candlestick pattern can make its contribution to success, but further analysis is necessary.

Summing up the results so far, the following conclusion remains for me:

The hammer indicates that the bulls are rebelling in the market and could lead to a turnaround in the next few days. Since buying the hammer directly and closing the position in the next one or two days is not profitable, it is obvious to regard the hammer as a kind of harbinger.

After all, especially with a view to the next 10 to 20 trading days, we have the chance to see again noticeably higher prices than the hammer. The trader's task now is to use his experience and concrete assessment of the current situation to set the timing for the entry. This also applies to the installation of potential stoploss and price targets. Only further tests can show whether we succeed in systematically capturing these thoughts. However, I cannot blindly recommend using a hammer formation to buy, based on this test.