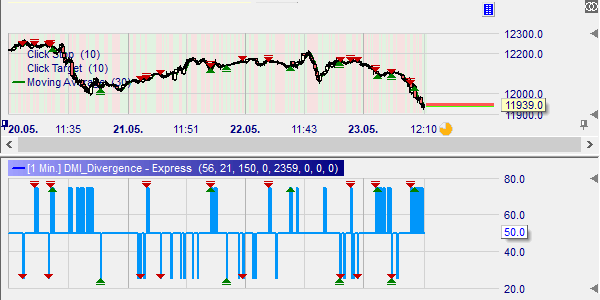 Both the Moving Average (MA) and the Directional Movement Indicator (DMI) are trend-following indicators. The moving average is calculated using closing prices. Though the DMI also factors in closing prices, it includes opening, highest, and lowest prices as well. Often these signals are emitted from the MA and the DMI at the same moment (the parameters are between brackets). Or in any case within a few days. These are often useful trend-following signals. The system including both indicators applies the following rules:

This system is therefore an example of how the number of trades can be reduced by the addition of an extra indicator. The two indicators match in the sense that they both have a trend-following character. The drawback of this is of course that signals are sometimes delayed. The question one needs to ask is: is this disadvantage cancelled out by the advantage of a reduced number of trades?

As stated above, this system is a trend-following one. Trend-following systems are often characterized by low hit rates (40–50%), together with high average profit / average loss (P/L) values (2–4). Profits are therefore realized in a relatively small number of lucrative trades. The disadvantages of occasional protracted losing streaks, and of profits that evaporate within a trade due to the indicator lag, also thus apply to this indicator combination.